Joey Dee and the Starliters Live at Resorts Atlantic City

The Early Days
Joey Dee’s career started in his hometown of Passaic, New Jersey. His original group “The Thunder Trio” consisted of Joey on harmonica, John Yanick on guitar, Tony “Dutchie” Sciuto on drums.  The group then morphed into Joey Dee & The Starliters. This group consisted of Joey on alto-sax, “Dutchie” on drums, Ralph Fazio on accordion, Ernie Cassini on trumpet, Tony Saragusa on bass and John Yanick on guitar. The group further evolved when Vince Corrao (guitar), David McLane (guitar), Don Martin (drums), Ernie Interella (keyboard) and Rodgers Freeman (lead vocals).  Joey Dee and The Starliters’ first single was “Lorraine,” backed with “The Girl I Walk To School,” in 1958 distributed by the company, Little. That same year, Joey Dee recruited David Brigati for the team after meeting him during a gig at Garfield High School in New Jersey. David and Rodgers would subsequently share lead vocal honors for The Starliters, with Joey ultimately becoming the primary lead singer. Another early single for the group was “Face of an Angel,” with David as lead vocal, released on Scepter Records; the flipside was “Shimmy Baby.” An album entitled “The Peppermint Twisters” and credited to “Joey Dee and The Starliters” was subsequently released by the company Scepter as well.

Various members of The Starliters, rotated during the next few years. The most famous lineup of Joey Dee and The Starliters is considered to be Joey Dee, David Brigati, Larry Vernieri (vocals) and Carlton Lattimore (organ). Carlton was replaced by  Bill Callanan who left their European tour, and was himself replaced by Felix Cavaliere. There was also Sam Taylor (guitar) and Willie Davis (drums).  Later members of the touring group would include Eddie Brigati (David’s brother), Gene Cornish, and Felix Cavaliere – three-quarters of The Young Rascals – as well as guitarist Jimmy James (later known as Jimi Hendrix), Charles Neville of The Neville Brothers, and a young Joe Pesci on guitar.

The 1960s
In 1960, The Starliters were noticed by agent Don Davis while performing at a Lodi, New Jersey nightclub called Olivieri’s. The group was booked at an intimate venue on 45th Street in New York City called the Peppermint Lounge for what was supposed to be a one-time weekend gig. During their initial appearance at the nightclub, actress Merle Oberon and Prince Serge Oblinski were dancing much of the night there. This being relayed in print the next morning by columnists Earl Wilson and Cholly Knickerbocker, it took barricades and mounted police to keep the crowds in line, which had backed to Broadway, the next night.  For several months, the craze would continue at the Lounge. Celebrity visitors continued to come and included Judy Garland, Andy Warhol,  John Wayne, Jackie Kennedy, Nat “King” Cole, Shirley MacLaine, Shelley Winters, Tennessee Williams, Truman Capote, Salvador Dali and Liberace.  Dee and company made such a sensation that they became the house band for the Peppermint Lounge, remaining for more than a year.  Dee wrote “Peppermint Twist,” along with producer Henry Glover, as a tribute to the lounge and the song scored #1 on the U.S. charts in early 1962.  It sold over one million copies, and was awarded a gold disc by Dick Clark of American Bandstand. By this time the team had contracted with Roulette Records.

One night in 1961, a trio of pretty teenagers were waiting on line outside the nightclub hoping to be allowed inside. Dressed in matching brightly colored dresses, they looked like professional entertainers (which in fact they were) and in a case of mistaken identity, thinking they were the dancers he’d hired, the manager of the Peppermint Lounge ushered the girls – Ronnie and Estelle Bennett and their cousin, Nedra Talley – up to the stage and told them to dance. The Ronettes spent the rest of that night dancing and singing along with Joey Dee and The Starliters, and the reaction from the group and the crowd was so positive that Joey offered the girls a job. Every night, The Ronettes would dance and perform along with The Starliters at the Peppermint Lounge, even traveling with them to the nightclub’s Miami Beach, Florida location in early 1962.

Also in early 1962, Joey Dee and The Starliters filmed the movie “Hey, Let’s Twist”, starring Jo Ann Campbell and Teddy Randazzo, for Paramount Pictures. “Hey, Let’s Twist” was a fictional story of Joey Dee (Randazzo and Dino DiLuca played the parts of Joey’s brother and father, respectively) and the Peppermint Lounge; its release capitalized on the current Twist craze and made the once-obscure Lounge famous. The movie and soundtrack album did their part in making the Peppermint Lounge a world-famous venue. Successful singles spawned from “Hey, Let’s Twist” were the title track and “Shout – Part I,” which became the group’s second-biggest selling record, reaching #6 on the U.S. charts. It also sold a million copies, giving the group their second gold disc. Other albums released during this time were “Doin’ The Twist At The Peppermint Lounge,” which was recorded live at the venue, and “All The World’s Twistin’ With Joey Dee & The Starliters.

In 1962, Joey Dee and The Starliters starred in their second motion picture, “Two Tickets to Paris”, along with Gary Crosby, Jeri Lynne Fraser and Kay Medford. One of the songs from this film, “What Kind Of Love Is This,” written by Johnny Nash, was released in September of that year and scored Top Twenty. In December 1962, the original Starliters did their final recording session as a group, producing “Help Me Pick Up the Pieces,” also composed by Nash, and “Baby, You’re Driving Me Crazy,” written by Joey Dee and Henry Glover. In 1963, Joey Dee recorded an album entitled “Dance, Dance, Dance,” with The Ronettes as his backup group. During spring of that year, Roulette released the track “Hot Pastrami with Mashed Potatoes,” from the previously issued live album, as a two-part single; the record made the U.S. Top Forty. Roulette later released “Ya Ya” and “Fannie Mae” from the same album. During October and November 1963, the Starliters toured Europe, performing one extraordinary night in Stockholm with The Beatles (already the biggest band in Northern Europe) as their opening act. In 1964, Joey Dee toured with various Starliters including Cornish, Cavaliere, and Eddie Brigati. Other group members at different times included Jimi Hendrix, who toured with the group in late 1965, Charles Neville (later of the Neville Brothers) and – early in their history – Joe Pesci played guitar with the band.

Later history
Dee continued to record and issue solo recordings from the mid-1960s to the mid-1970s, as well as a song he wrote with original Starliters David Brigati and Larry Vernieri entitled “How Can I Forget” in the late 1960s which was released under the name Joey Dee and The New Starliters. He continued to travel and make personal appearances with various Starliters. For a while he used son Ronnie’s group D-Force to back him. Members included Phil Fest, George DiBernardo, Andy Beer, and Nick Perrera.

In 2001, the group was featured on a PBS special, Rock, Rhythm and Doo-Wop, and in 2005 they appeared on the Jerry Lewis Telethon for Muscular Dystrophy as he had done since the early 60’s.

As of now Joey Dee and The Starliters consists  of Joey’s son Ronnie DiNicola, and daughter Jamie Lee. Ronnie plays saxophone and sings backup vocals for his father. Jamie has been singing with passion since she was in diapers, and has shared the stage with too many legends to mention.

On Sunday September 19, 2010, a street corner was dedicated to Joey Dee in his home town of Passaic NJ. The street signing took place on the corner of Washington Place and Columbia Avenue.  Lincoln Middle School also named their auditorium after Joey Dee & The Starliters. 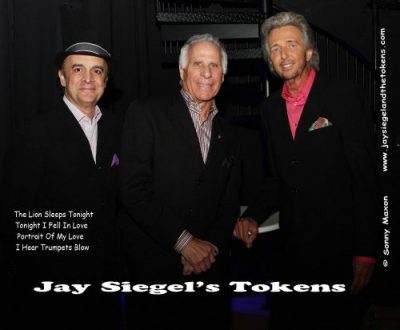 York City in the late 50’s and early 60’s. The history of Brooklyn alone testifies to the remarkable talent that called just that one borough “home” back in those days.  What is extraordinary, though, is the incredible feat that one of those groups has accomplished.

After having their music break onto the pop charts for the first time in 1961, THE TOKENS have been back on the charts!

It was more than 30 years after the debut of their first big hit, “TONIGHT I FELL IN LOVE”, when they re-emerged on the Billboard Hot 100 Singles Chart in August of 1994, following the re-release of their chart-topping single, “THE LION SLEEPS TONIGHT.”  With that re-entry comes the distinction of having the second-longest chart span in the rock era!  Billboard’s archives also show that the South African folk song “Wimoweh,” which inspired the song that went to #1 worldwide, first charted 42 years earlier!  No other title can claim that longevity!

The release of the Disney motion picture “The Lion King” prompted RCA to re-release “THE LION SLEEPS TONIGHT” and a CD featuring a unique compilation of twenty of THE TOKENS’ earlier tunes.  It gives their fans a rare opportunity to enjoy many of the songs THE TOKENS wrote more than thirty years ago, as well as songs popularized by other artists which THE TOKENS later recorded in their own distinctive style.

That style and sound, of course, is elegantly defined by JAY SIEGEL, whose tenor lead and trademark falsetto have characterized all THE TOKENS’ music since the group began recording, and continues to do so today as they perform around the country. JAY SIEGEL’S TOKENS  consists of Bill Reid & Kurt Yaghjin.

While dyed-in-the-wool TOKENS fans know that Jay had always sung lead on the group’s hits (including, among many others,”TONIGHT I FELL IN LOVE”, “PORTRAIT OF MY LOVE,” “LA BAMBA,” “B’WANINA,” “HE’S IN TOWN,” “SHE LETS HER HAIR DOWN”, “I HEAR TRUMPETS BLOW”)and “THE LION SLEEPS TONIGHT”) know that he had a hand in writing many of them, some may not be aware of the number of hats he wore.

THE TOKENS were one of the first independent, not to mention youngest, teams to produce recordings for a major label, breaking into the really big-time in 1962, when they became the first vocal group to produce a #1 record for another vocal group!  Remember “He’s So Fine” by The Chiffons?  That was the first of many smash hits Jay and his group had a hand in producing.  They became the production geniuses behind numerous other hits by The Chiffons, as well as the biggest hits by Tony Orlando and Dawn, The Happenings, Randy and the Rainbows, and Robert John.  While many know that the group Dawn was named by Jay after one of his daughters, it’s a lesser known fact that Jay and two session singers actually were the group on Orlando’s first album!  He and THE TOKENS also sang backup vocals for such diverse artists as Del Shannon, Melissa Manchester, Connie Francis, The Blues Project, Keith, Mac Davis, Al Kooper & Bob Dylan.

Besides leaving their imprint on the pop music scene as singers, songwriters, arrangers, producers, and record executives, THE TOKENS were successes as writers, producers, and singers of commercials, reminding us that “Pan Am makes the going great…,” “Ban won’t wear off as the day…,” and that Chesterfields are a “Silly Millimeter Longer” . They were also the voices for Clairol, General Foods, Wrigley’s gum, Eastern, United & Pan Am  Airlines, Cool Whip, and Wendy’s. The Tokens were inducted into the Vocal Group Hall Of Fame in 2004. JAY SIEGEL”S  TOKENS are truly one of the pop music scene’s most versatile, talented and enduring groups!